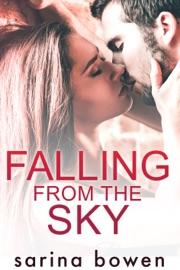 Falling from the Sky

She's the woman he doesn't remember. He's the man she can't forget.

Bad boy Hank “Hazardous” Lazarus used to have everything: a gorgeous girlfriend, a career as a freestyle snowboarder and a spot on the US Olympic team. Nine months ago, after a bad crash in the half pipe, he woke up in the hospital, unable to move his legs. Now he’s landed there again, but gravity is not the culprit. His family is pressuring him to try a groundbreaking treatment, but Hank self-medicates with too much tequila instead.

Doctor Callie Anders has the courage to restart a patient’s heart with a thousand volts of electricity, yet she’s afraid to risk her own. So she doesn’t confess to the clinic’s newest patient they they met just before the accident, an encounter that he doesn’t remember. Even as their friendship develops, she won’t admit that she regrets turning down his dinner invitation, or that her heart stutters every time those inked shoulders roll through the door of the therapy department.

With winter coming again, Hank needs a hand out from under the avalanche of his disappointments. If only Callie were brave enough to take the job.