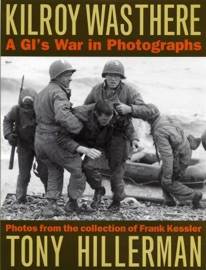 When I saw Frank Kessler’s collection of photographs I was struck by how different they were from the movie-camera views I see on television. No public relations pictures here, intended to glorify battle and rally support. These were up-close snapshots of the dirty, damp, and disheveled men in the rifle companies and tank units. It was the war as they endured it, as they struggled through it from the beaches of France to the streets of Berlin until they finally won it. —Tony Hillerman