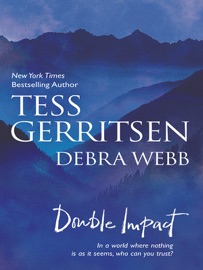 TESS GERRITSEN’S Never Say Die
Willy Jane Maitland traveled to Saigon to uncover what had happened to her father, missing in action twenty years ago. Instead she found intrigue—and murder. Only the rumpled and irreverent ex-soldier Guy Barnard seemed willing to help. But as Willy was about to discover, even Guy had his hidden motives, his shocking secrets…and Vietnam was a dangerous place to fall in love.

DEBRA WEBB’S No Way Back
Michal Arad wanted vengeance when he kidnapped former CIA agent Ami Donovan, claiming she’d posed as his lover to set him up as an assassin. But Ami had amnesia and no way of knowing the truth…until Michal took her in his arms. In spite of her fear, Ami sensed Michal wasn’t a ruthless killer, but the man she’d once loved…and the father of her child.