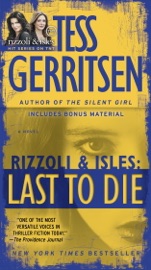 For the second time in his short life, fourteen-year-old Teddy Clock has survived a massacre. Orphaned once more when his foster family is murdered, the traumatized teenager has nowhere to turn—until the Boston PD puts Detective Jane Rizzoli on the case. Jane spirits Teddy to the exclusive Evensong boarding school, a sanctuary where young victims of violent crime learn vital skills of survival. But even behind locked gates, Jane fears that Evensong’s benefactors aren’t the only ones watching. And when she learns of two other students whose pasts bear a shocking resemblance to Teddy’s, it becomes chillingly clear that a circling predator has more than one victim in mind. Joining forces with medical examiner Maura Isles, Jane races to stop an obsessed killer’s twisted quest—before an unspeakable secret dooms the children’s fate.

Don’t miss Tess Gerritsen’s short story “John Doe,” and a sneak peek of her novel, Girl Missing, in the back of the book.

“One of the most versatile voices in thriller fiction today.”—The Providence Journal

“[Tess] Gerritsen has a knack for creating great characters and mysterious plots that seem straightforward but also dazzle with complexity and twists.”—Associated Press

“An exciting and puzzling mystery . . . [Last to Die] is a key book in a series that keeps getting better and better.”—Bookreporter

“Gerritsen skillfully heightens the tension right up to the suspenseful ending.”—Booklist