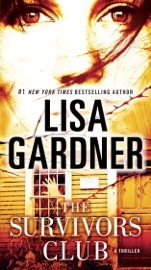 . . . that’s what Jillian Hayes, Carol Rosen, and Meg Pesaturo call it. They won’t consider themselves victims. They are survivors. They helped lead the investigation that caught the man who changed their lives forever. Now they are the prime suspects in his murder.

Could three ordinary women have been driven to do the unthinkable? Detective Sergeant Roan Griffin knows all too well what can drive even the best people to cross the line. Has someone in the Survivors Club become a killer? And if so, can he blame her, let alone bring her to justice?

“Has it all: provocative plotting, engaging characters, and a razor-sharp emotional edge.”—Stephen White

“This club is worth the dues.”—People

BONUS: This edition contains an excerpt from Lisa Gardner's Love You More, and a peek at the script for The Killing, AMC’s original series, which tracks the murder of a Seattle teenager and the gripping investigation it sparks, only on AMC.