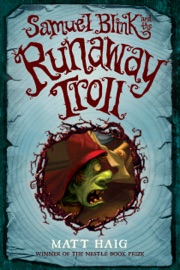 Samuel Blink and the Runaway Troll

When Troll-Son runs away from home, he decides to leave the Shadow Forest behind and move in with his idol, Samuel Blink. Samuel isn't thrilled with the idea of hiding a runaway troll, especially one who copies everything he does, even (ugh!) using his toothbrush. But should Samuel return Troll-Son to the Shadow Forest? After all, he's running from something . . . what danger still lurks there?
This engaging adventure showcases Matt Haig's wry sense of humor, drawing readers deeper into the imaginative world introduced in Samuel Blink and the Forbidden Forest.