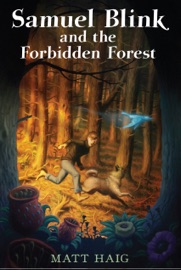 Samuel Blink and the Forbidden Forest

Funny and captivating fantasy from rising star Matt Haig!
Samuel and Martha's new life with their Aunt Eda in Norway is filled with rules, but most important is rule number nine: NEVER 'UNDER ANY CIRCUMSTANCES' GO INTO THE FOREST. Sure their Uncle Henrik disappeared in the forest ten years ago, but it can't be the forest's fault-can it? Samuel is skeptical until he finds an unusual book, The Creatures of Shadow Forest, which describes the fantastic and sinister creatures supposedly living there. Could Aunt Eda be right? Samuel discovers the truth about the forest's dangerous secrets when Martha becomes lost in the forest, and it's up to him to save her.