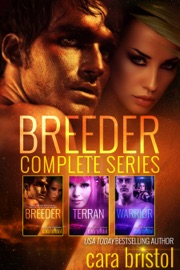 On a world that doesn’t even have a word for love, a gender caste system keeps women in slavery, relegated to breeding. But love will triumph.

She was only meant to be the Alpha Commander's breeder...but she became his everything.

Alpha Commander Dak purchases Omra because he needs a son to carry on his legacy. But when when he falls in love with her, he begins to question the caste system he’s responsible for enforcing.

Can he expose the rampant cruelty and corruption in Parseon culture... or will the protocol he's spent his life defending be the weapon used to destroy them and their love?

She’s at the mercy of her alien abductor…

A vendor in the Parseon marketplace, human Tara Diehl, has adjusted to the male-dominated culture better than most until she’s kidnapped by Alpha Commander Marlix. After all her methods and ploys to escape fail, she decides to seduce her way to freedom. But out of subterfuge grows a true intimacy that cause Marlix and Tara to take a stand that drives the planet to the brink of a civil war that threatens their love and their lives.

In a fight for freedom, will love become the casualty?

Secretly in love with another man, Anika refuses to accept an arranged breeding and flees. Bound by duty, her lover Urazi must bring her back to fulfill her responsibility. But as war breaks out, and their planet fights a desperate battle against a villainous despot, Anika and Urazi unite in determination to save their people. With their lives on the line for disobeying orders, the forbidden love they share becomes the biggest danger of all.

The Breeder series is an edgy science fiction romance about a violent society struggling with a caste system based on gender. It may contain triggers for some people. Each individual book ends with an HEA and no cliffhanger for the hero/heroine, but the final conclusion and HEA for the society and its women doesn’t occur until the end of Warrior, book three.