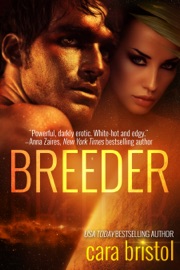 She was only meant to be the Alpha Commander's slave...but she became his everything.

High Commander Dak, a ruling Alpha of planet Parseon, purchases Omra strictly as a breeder slave. He intends to impregnate her, produce a son, and hand her off to his anointed beta partner, Corren. Any infractions of the rules by her will be harshly punished.

But as Dak and Omra discover a sexual bliss banned by law, Dak begins to question the traditions and ways of his people, causing him to jeopardize his command and endanger the life of the woman he has come to love.

Dak has enemies, men who will not hesitate to exploit his fondness for Omra, and use it to portray him as unfit to rule as Alpha. Can he expose the rampant cruelty and corruption in Parseon culture... or will the protocol he's spent his life defending, be the weapon used to destroy them and their love?