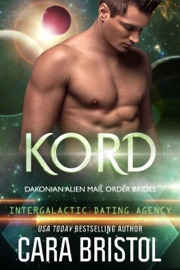 She’s a successful Texas restauranteur, but he’s hungry for more than what she’s cooking.

Barb Quintain seems to have it together. She owns the hottest restaurant in town, lives in a fabulous luxury apartment, and has a personality as big as the state of Texas. But outward confidence conceals old wounds as big as Texas, too. She hides behind success, fearing someone will discover what she’s really like—a fake, a fraud, all broth and no beans.

Then, one evening, he walks into her restaurant—the hottest, sexiest man she’s ever seen. Kord. An alien from Dakon who’s so out of her league, she could never deserve him.

Kord doesn’t understand why none of his Intergalactic Dating Agency matches have panned out until he happens into Barbie Q’s Restaurant and meets the proprietress. His twitching horns immediately signal she’s his Fated mate. Unfortunately, she doesn’t seem to recognize that. The only thing he can do is get her to hire him so he can convince her they’re meant to be together.

Just as Kord’s patience wins her over, and Barb begins to envision herself as his mate, a family crisis sends her running in her rhinestone boots. Will confronting her past destroy their future?