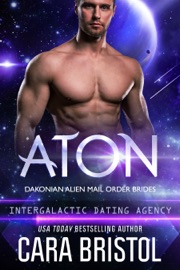 For an alien and a human girl, all’s fair in love and courtship…

Attorney Toni Sutterman is on the fast-track, her success all but an open-and-shut case when she realizes she lacks what’s important: true love. With marriage-minded men in short supply on planet Earth, she joins the Intergalactic Dating Agency hoping to find a good match with an extraterrestrial. When her alien mate finally arrives, he proves beyond all doubt to be the man of her dreams: tall, sexy, romantic, and totally devoted to her. So what if there’s a bit of gray area about how he actually got here?

Aton of planet Dakon doesn’t mean to pull a fast one. He has every intent to play by the rules until false accusations get him escorted from the spaceship just before it blasts off. Neither spurious allegations nor the vastness of space will keep him from his mate, so he makes his own way to Earth to claim the female he was promised. As soon as he sees Toni, he recognizes her as his Fated mate. Confident he’s acted in good faith, he focuses on courting her and beginning their life together.

But when a rival discovers the truth and administers some rough justice, will Toni be willing to break the rules and become Aton’s partner in crime to save their future…or will she play by the book?