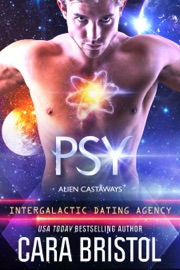 Locked in a prison of silence…

Cassie Steward has not spoken a word. Ever. A congenital birth defect robbed her of the ability to speak. Craving independence from her overprotective, well-meaning mother, she gets a job at the antique store in their small town. Yet, the fact remains she’ll always need to write notes to communicate.

Then she meets Psy, an alien with telepathic abilities. From the moment his mind touches hers, the universe seems within her grasp, and she envisions fulfilling all her dreams with Psy at her side.

Soon after encountering the beautiful, shy Cassie, Psy realizes she’s his genmate. It doesn’t matter she can’t talk—he loves her as she is. But as their telepathic connection deepens, he begins to suspect her inability to speak is more than a congenital happenstance.
Something far more sinister appears to be keeping her a virtual prisoner.

He’s certain his psychic powers can unlock the secrets in Cassie’s mind. But will revealing the truth liberate her…or destroy their bond?