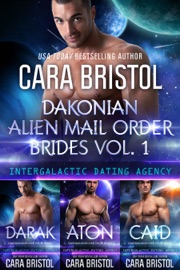 Aliens have come to Earth! They’re hot, they’re horned, and they’re looking for their fated mates.

Pastry chef Lexi Sutterman has lived in the shadow of her wealthy, hypercritical family. When her uber-successful little sister nabs a well-heeled fiancé, Lexi joins the Intergalactic Dating Agency, intending to bring a huge, purple, tentacled alien as her plus-one to the wedding.

Darak of planet Dakon isn’t purple or tentacled—he’s just seven feet of horned alien hotness. He recognizes Lexi as his true mate, but realizes convincing her they’re meant to be together forever will be no cakewalk.

Attorney Toni Sutterman’s success is on the fast track to success when she joins the Intergalactic Dating Agency, hoping to find her alien mate. When Aton arrives, he proves beyond all doubt to be the man of her dreams: tall, sexy, romantic, and devoted to her.

Aton of planet Dakon didn’t intend to pull a fast one. But when false accusations got him escorted off the spaceship, he broke the law and made his own way to Earth.

When Toni’s rival discovers the truth and threatens to administer some rough justice, will she be willing to become Aton’s partner in crime to save their future…or will she play by the book?

Matchmaker Jessie Hancock has a perfect record helping others find true love through the Intergalactic Dating Agency until Caid arrives. When none of the dates she sets up meet with his approval, her boss gives her an ultimatum—find Caid a match or else!.

The instant Caid from planet Dakon lays eyes on Jessie, he knows she’s his mate. He plays along with her attempts to match him with someone else while doing his best to charm her. Now time is running out, and if he can’t up his game, he’ll lose her forever.