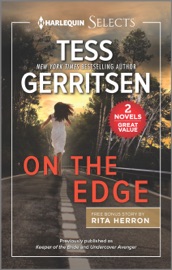 Chasing the truth can be deadly

If Nina Cormier’s wedding had taken place, she would be dead. After the bride was left at the altar, a bomb exploded in the empty church. And when a stranger tried to run her off the road, Nina realized someone wanted to kill her. But who? Now Detective Sam Navarro and Nina must try to stop a brilliant madman, one who is playing for keeps…

After surviving a near-fatal accident, undercover agent Eric Caldwell wanted revenge. Falling for his beautiful physical therapist wasn’t part of his plan. Melissa Fagan was investigating the same mysterious medical research complex that he was. But now someone wants her dead—before she can discover the truth about her birth parents. How can Eric protect her without blowing his cover and risking both their lives?

Previously published as Keeper of the Bride and Undercover Avenger