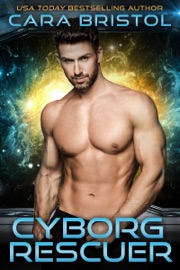 A cyborg with haunted past, a woman with a clouded future…

Battered and broken, hostage and sole survivor Solia waits for death at the hands of vicious predatory aliens when Cyber Operations agent Guy Roarke disobeys orders, charges in, and rescues her.

A former medic, he initiates emergency medical procedures before rushing her to Cybermed, in hopes of saving her wings so she can fly again. He’s taken with the delicate, brave Faria, but his best intentions result in unfortunate consequences that place her in greater jeopardy.

Can he overcome the guilt of past mistakes in time to save her life?

Cyborg Rescuer is a standalone read in the Men of Mettle series. It was originally titled Rescued by the Cyborg and published in Pets in Space 2: Embrace the Romance.