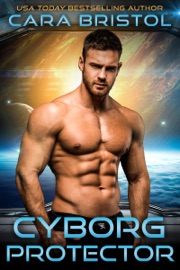 A duty to protect his sworn enemy…

Ten years ago the president’s teenage daughter, Penelope Isabella Aaron, had leveled false accusations against Brock Mann and derailed his protection officer career. Much has changed in a decade: “PIA” as he code-named her, has grown up. She’s an ambassador about to attend her first Association of Planets conference, and Brock has been transformed into a cyborg.

Now a secret agent with Cyber Operations, he gets called in, not when the going gets tough, but when the going gets impossible. So when he’s assigned to go undercover as Penelope’s husband and ensure she gets safely to the summit, he balks. But honor won’t allow him to shirk his duty, and he agrees to protect the woman he’d sworn to despise.

But if a terrorist bombing and a crash landing on a hostile planet aren’t bad enough, Brock soon discovers his unexpected growing attraction to his protectee makes Operation: PIA his most dangerous assignment yet.

Cyborg Protector (Men of Mettle 1) was originally titled Stranded with the Cyborg.