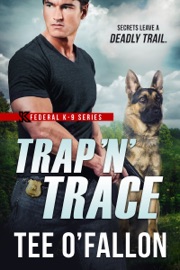 For wealthy socialite Katrina Vandenburg, business meetings and charity galas are all part of her orderly, structured world—one that gets blown to hell after finding two dead bodies in the same day. The police think she was in the wrong place at the wrong time. FBI Special Agent Dayne Andrews thinks otherwise. Dayne and his K-9, Remy, are tracking a cold-blooded killer, and that trail...leads straight to Kat.

Kat and her rescue shelter—the Canine Haven—are the only common denominators between the murders, and Dayne is convinced she’s dead center in the killer’s sights. Protecting her will test every ounce of his steely resolve. She’s the most intriguing woman he’s ever met. And everything he shouldn’t want. Too bad neither of them seem to have gotten the memo.

And they need to focus on catching a killer now more than ever. Because if Dayne and Remy fail in their mission, nothing will stand between Kat and the killer’s deadly blade.