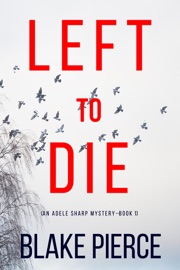 Left To Die (An Adele Sharp Mystery—Book One)

“When you think that life cannot get better, Blake Pierce comes up with another masterpiece of thriller and mystery! This book is full of twists and the end brings a surprising revelation. I strongly recommend this book to the permanent library of any reader that enjoys a very well written thriller.”
--Books and Movie Reviews, Roberto Mattos (re Almost Gone)

LEFT TO DIE is book #1 in a new FBI thriller series by USA Today bestselling author Blake Pierce, whose #1 bestseller Once Gone (Book #1) (a free download) has received over 1,000 five star reviews.

FBI special agent Adele Sharp is a German-and-French raised American with triple citizenship—and an invaluable asset in bringing criminals to justice as they cross American and European borders.

When a serial killer case spanning three U.S. states goes cold, Adele returns to San Francisco and to the man she hopes to marry. But after a shocking twist, a new lead surfaces and Adele is dispatched to Paris, to lead an international manhunt.

Adele returns to the Europe of her childhood, where familiar Parisian streets, old friends from the DGSI and her estranged father reignite her dormant obsession with solving her own mother’s murder. All the while she must hunt down the diabolical killer, must enter the dark canals of his psychotic mind to know where he will strike next—and save the next victim before it’s too late.

An action-packed mystery series of international intrigue and riveting suspense, LEFT TO DIE will have you turning pages late into the night.

Books #2-#10 in the series are now also available!