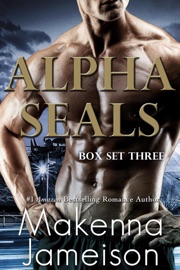 Continue the addictive Alpha SEALs series with the next three books in one collection!

Physical Therapist Sarah Foster shouldn't get into another argument with her brother's SEAL team CO. She just shouldn't. But when the always cool, calm, and aloof Commander Ryan Mitchell is in the room, she just can't help herself. His disciplined, precise ways from years in the military are the exact opposite of her fun-loving, carefree lifestyle.

And so what if his broad shoulders and jaw carved from granite make her want to melt right into a puddle at his feet? He's married to his career and wouldn't glance a woman's way if she was skinny-dipping right in front of him. Not that she's tried that.

Alpha SEALs Commander Ryan Mitchell has always been set in his ways. He's given his life to the Navy, and one free-spirited woman with long, honeyed hair and curves to make a grown man weep can't tempt him to stray from his focus. No matter how much he'd love to taste the forbidden fruit.

But when Sarah's brother Patrick "Ice" Foster is injured on a mission, Sarah has no one to turn to. And Commander Mitchell is letting the guilt eat him alive for letting his men fall into harm's way.

He needs to be in control. She needs an anchor in the midst of the chaos. And when the two polar opposites meet?

TEMPTED BY A SEAL
He vowed to protect her...but can he avoid falling for her?

British archeologist Emma Williams narrowly escaped being kidnapped while conducting research in the Middle East. Now she has critical documents a terrorist group is searching for—and they'll stop at nothing to track her down. The brash, bossy American Navy SEAL she meets in a pub was never supposed to be part of her escape plan—but if she can ignore his bulging muscles, bravado, and piercing blue eyes, she might just get out of this unscathed.

Navy SEAL Hunter "Hook" Murdock is on his way home from an operation when he finds himself tracking down terrorists in London. The feisty archeologist he meets in a pub isn't supposed to be the woman they're searching for—but he'll stop at nothing to protect her. The beautiful Emma may be book smart—but she's completely naïve when it comes to her own safety. He'll watch her 24/7 if he has to—and attempt to ignore her feminine curves, pouty lips, and whip-smart personality.

When the Oxford-educated Emma meets the rough-and-tumble Navy SEAL, all bets are off. Sparks fly as they flee danger—and attempt not to fall for one another.

MARRIED TO A SEAL
Everything can change in a heartbeat…

Navy SEAL Patrick "Ice" Foster has devoted his life to the Navy, but when he met attorney Rebecca Mayes a year ago, she and her daughter instantly stole his heart. A surprise pregnancy means big changes are coming in their lives—and neither of them could be happier.

When Patrick's SEAL team is sent on a rescue mission to Afghanistan, an explosion changes everything in an instant. Patrick is gravely injured, and Rebecca doesn't know if he'll survive—or that he's already bought her a ring.

Patrick will do anything to make it back to Rebecca. But will the future they dreamed of never even have a chance to start?