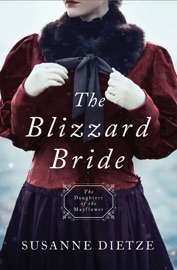 A Blizzard Changes Everything

Abigail Bracey arrives in Nebraska in January 1888 to teach school…and to execute a task for the government: to identify a student as the hidden son of a murderous counterfeiter—the man who killed her father.

Agent Dashiell Lassiter doesn’t want his childhood sweetheart Abby on this dangerous job, especially when he learns the counterfeiter is now searching for his son, too, and he’ll destroy anyone in his way. Now Dash must follow Abby to Nebraska to protect her…if she’ll let him within two feet of her. She’s still angry he didn’t fight to marry her six years ago, and he never told her the real reason he left her.

All Dash wants is to protect Abby, but when a horrifying blizzard sweeps over them, can Abby and Dash set aside the pain from their pasts and work together to catch a counterfeiter and protect his son—if they survive the storm?

Join the adventure as the Daughters of the Mayflower series continues with The Blizzard Bride by Susanne Dietze.