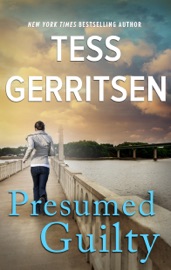 Miranda Wood thinks she has seen the last of Richard Tremain, her rich and married ex-lover—until she discovers him stabbed to death in her bed. With her knife.

Miranda is the obvious suspect, and she looks even guiltier when her bail is posted by an anonymous donor. Was this an act of kindness designed to buy her time to clear her name? Or is someone trying to manipulate Miranda and draw her into the dark and secret world of a murdered man, where everybody’s presumed guilty?

With her world falling around her, Miranda is determined to discover who killed Richard. But proving her innocence may become secondary to staying alive.…