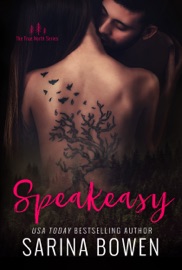 NOW A USA TODAY BESTSELLER! Sometimes you fall for Mr. Right. And sometimes for Mr. Right Now…
May
Did you hear the one about the girl who walks into a bar and catches her live-in lover kissing someone else? No? You’re the only one in town who missed it.
Luckily Alec is there to wrap me up in strong arms and carry me out the door before things get too ugly. And that’s not all Alec is good at. Our unexpected chemistry makes him the perfect rebound guy.
Alec
I should know better than to hook up with my rival’s little sister, but the fiery look in May’s eyes really turns my crank. She needs cheering up, and I’m just the guy for the job.
It’s not like I’ll fall in love. Not even after a string of scorching hot trysts, and the realization that we’re good at the same things: wild nights and familial disappointment. I don’t do love, never have, never will. So this is the perfect arrangement, for both of us.
Nobody would approve, but nobody has to know…

"A love story that is unexpected, surprising, atypical, and rewarding in every single way." Natasha is a Book Junkie
"A barn burner of a romance with depth and complexity." The Daily Waffle