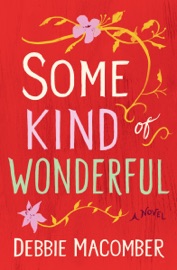 Some Kind of Wonderful

In Debbie Macomber’s delightful take on Beauty and the Beast, an idealistic teacher and a mysterious mogul prove that opposites do attract . . . all the way to happily ever after.

Unspoiled by the trappings of wealth, Judy Lovin shunned the family fortune to take a job teaching preschool. But with her father’s empire on the verge of collapse thanks to a hostile corporate takeover, Judy reluctantly rides to the rescue. Her negotiations bring her face to face with the beast himself, a ruthless tycoon who takes what he wants—and what he wants is Judy. Shocked at her attraction to a man she was prepared to loathe, Judy agrees to his terms: alone time with him at his island getaway.

Sexy, smart, and ruggedly untamed, John McFarland lives by his own rules. He’s never met a woman as pure and kind and lovely as Judy, who seems so fearless in the face of the demons that haunt him. As John’s rough edges soften in the magic of the moonlight, and as he learns to listen to his own pounding heart, this beast comes to believe in the one thing he convinced himself he could never have: love.