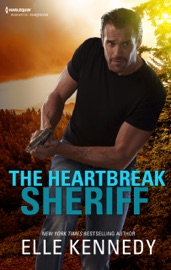 A sheriff gets a second chance—but must balance his love for the law with his love for this woman—in the dramatic romantic suspense by New York Times bestselling author Elle Kennedy!
Single mom Sarah Connelly can’t believe the man she used to be in love with is throwing her in prison! Sheriff Patrick “Finn” Finnegan keeps assuring Sarah he’ll get her out of this mess, but her trust in him was annihilated long ago. Still, just being in his larger-than-life presence sets Sarah’s pulse racing….

Finn knows in his heart Sarah is innocent of murdering Teresa Donovan. But he can’t ignore the overwhelming evidence against Sarah—nor the desire he still feels for her. Somehow, he’s got to find the real killer and convince the only woman he’ll ever love to give him a second chance.