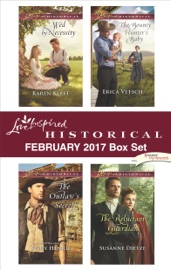 Caught in a storm overnight with her father’s new employee, Caroline Turner’s reputation is damaged. And the only way to repair it is to marry Duncan McKenna. But can a sophisticated socialite and a down-to-earth stable manager put their differences aside and find love?

THE OUTLAW’S SECRET
by Stacy Henrie

When Essie Vanderfair’s train is held up by outlaws, the dime-store novelist connives to be taken hostage by them, seeking material for her next book. But she doesn’t anticipate falling for one of the outlaws…or that he’s secretly an undercover detective.

Bounty hunter Thomas Beaufort has no problem handling outlaws, but when he’s left with a criminal’s baby to care for, he’s in over his head. And the only person he can turn to for help is Esther Jensen, the woman whose heart he broke when he left town.

THE RELUCTANT GUARDIAN
by Susanne Dietze

On the verge of her first London season, Gemma Lyfeld accidently stumbles on a group of smugglers, catching them in the act…and they think she’s a spy. Now she must depend on covert government agent Tavin Knox for protection. But how will she protect her heart from him?