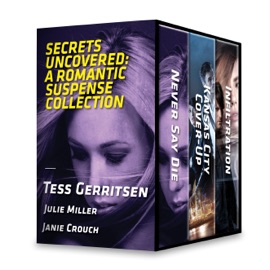 Twenty years after her father's plane crashes, Willy Jane Maitland is finally tracking his last moves. She recognizes the danger, but her search for the truth is the only thing that matters. Willy knows she can't proceed without the help of ex-army officer Guy Barnard. But in a place where truth has many faces, she suspects even Guy has hidden motives…

As the Kansas City Police Department's archenemy, reporter Gabriel Knight never expected to need its help. But the sexy journalist suspects the death of a politician's aide will shed light on the long-unsolved murder of his fiancée. He demands to team up with tough, beautiful detective Olivia Watson. Sharing a mutual distrust—and a disturbingly mutual attraction—Gabe and Olivia discover that someone's working hard to keep old secrets buried and stop their investigation dead.

Omega Sector agent Cameron Branson is on the most important case of his career: recovery of classified software that has fallen into the wrong hands. After months of undercover work, he's on the verge of cracking the case. Until Sophia Reardon -a familiar face from his past- shows up in the wrong place at the wrong time. Knowing that she could expose him, Cameron is forced to hurl Sophia into his world of deception and terror. And as it all begins to unravel, Cameron must choose - finish the mission or save the one woman he's never been able to forget.