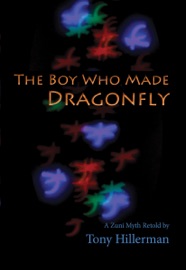 The Boy Who Made Dragonfly

As readers of Tony Hillerman's detective novels know, he is a skilled interpreter of southwestern Indian cultures. In this book, first published in 1972, he recounts a Zuni myth first recorded a century ago by the anthropologist Frank Hamilton Cushing. Hillerman's version of the story, written to be read by children ten years old and up, will have equal appeal for adults with an interest in Native American culture.

"In our society," Hillerman explains, "this would be called a 'Bible story.' Like stories based on the Old Testament, this narrative is intended to teach both the history and morality of a people." It tells the consequences of a drought in which Zuni crops were ruined and the tribe was forced to accept charity from neighboring Hopis.